The RayWenderlich.com team has been hard at work after WWDC, once again, to bring this year’s “by tutorials” book. This year it’s, of course, iOS 7 by Tutorials. And today I can announce that we have finally been able to release it now that Apple’s iOS 7 NDA has been released! 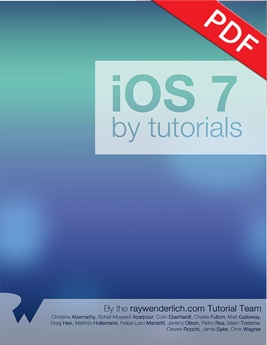 The book covers a ridiculous number of things. Here’s the outline (with the chapters I wrote in bold):

Also, there is what we’re calling an “iOS 7 Feast”. This is a whole load of free stuff from site including tutorials, updated tutorials and even some stuff we’re giving away!