This post has been a long time coming. It’s been a draft for many months, but I’ve been busy writing my book and didn’t have time to finish it off. But now I’ve finished it and here it is!

Following on from episode 1 and episode 2 of my look inside blocks, this post takes a deeper look at what happens when a block is copied. You’ve likely heard the terminology that “blocks start off on the stack” and “you must copy them if you want to save them for later use”. But, why? And what actually happens during a copy? I’ve long wondered exactly what the mechanism is for copying a block. For example, what happens to the values captured by the block? In this post I take a look.

What we know so far

From episodes 1 and 2, we found out that the memory layout for a block is like this: 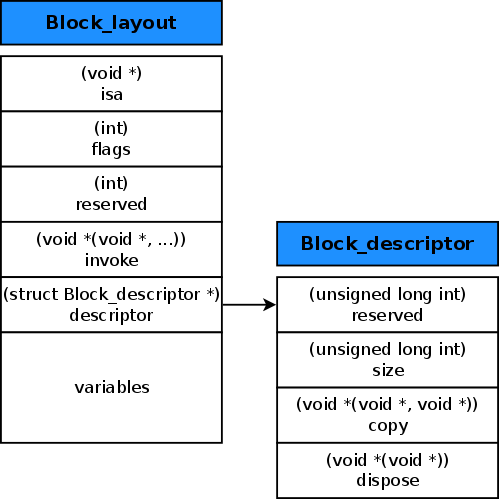 In episode 2 we found out that this struct is created on the stack when the block is initially referenced. Since it’s on the stack, the memory can be reused after the enclosing scope of the block ends. So what happens then if you want to use that block later on? Well, you have to copy it. This is done with a call to Block_copy() or rather just send the Objective-C message copy to it, since a block poses as an Objective-C object. This just calls Block_copy().

So what better than to take a look at what Block_copy() does.

First of all, we need to look in Block.h. Here there are the following definitions:

So that just calls _Block_copy_internal() passing the block itself and WANTS_ONE. To see what this means, we need to look at the implementation. This is also in runtime.c. Here is the function, with the irrelevant stuff removed (mostly garbage collection stuff):

And here is what that method does:

That’s pretty neat, eh! Now you know what happens when a block is copied! But that’s only half of the picture, right? What about when one is released?

The other half of the Block_copy() picture is Block_release(). Once again, this is actually a macro that looks like this:

Just like Block_copy(), Block_release() calls through to a function after casting the argument for us. This just helps out the developer, so that they don’t have to cast themselves.

And here’s what each bit does:

And that is that! There’s not really much more to it!

That concludes my tour into blocks, for now. Some of this material is covered in my book. It’s more about how to use blocks effectively, but there’s still a good portion of deep-dive material that should be of interest if you enjoyed this.