I have been hard at work the past couple of nights on my new version of Subnet Calc. I’ve managed to get the basics of it working and I have learnt a lot along the way. But because I feel I’ve achieved quite a lot I thought I’d share what I’ve done so far by showing off some screenshots of Subnet Calc Pro running on my iPod Touch. So here they are: 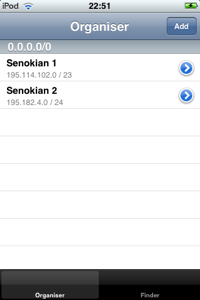 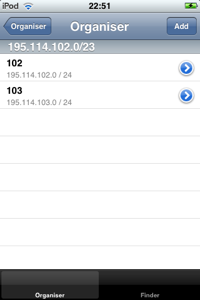 These screenshots show the top level of the organiser view (on left) which is where all your subnets are now kept. From here you can start adding new subnets and also drill down (on right) through the subnets to create a hierarchy of subnets. I thought this would be useful as it’s something which I will definitely be using at work! 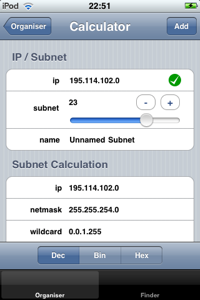 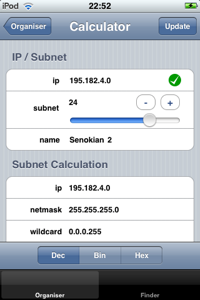 So, hopefully that has tickled your taste buds for more! Next to come is a means for automatically splitting a subnet up into sub-subnets (I really need a new name for that!) and a means for finding the smallest subnet which encompasses a given set of IPs.